A couple of Python coding dojo’s 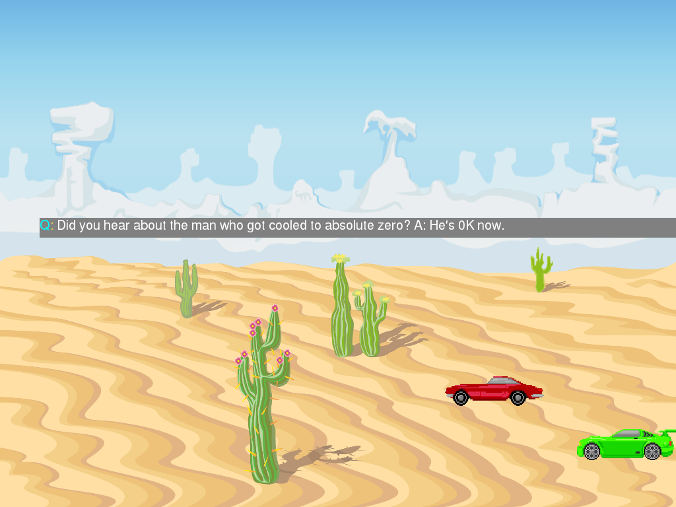 As Joe Wright puts it

A Coding Dojo is a programming session based around a simple coding challenge. Programmers of different skill levels are invited to engage in deliberate practice as equals. The goal is to learn, teach and improve with fellow software developers in a non-competitive setting.”

There is something quite satisfying about having a brief period to create something, by yourself or with others. So I recently went to a couple of coding dojo’s

On the third evening of the conference, about 60 people took on the challenge of using Pygame Zero to create something on the theme of “Four seasons” We used a peer coding approach, to simplify code sharing. And, with it being quite a simple concept to implement, we didn’t need to code in parallel. So, despite being one of the more experienced developers on the team, I sourced and prepared the assets (i.e. the pictures), whilst supporting my team mate who was behind the keyboard.

The end result was quite well received

You can find all the submissions at https://github.com/PyconUK/dojo18. Ours is under “shaunsfinger”.

About 15 developers got together for this meetup, and took on the challenge of creating a “TypeRacer”

As far as I could tell, this meant typing as fast as possible. This probably referred to the TypeRacer website. I had not seen this before, but did know something similar, the space shooting typing game ZType

I imagined our game as a car which moves when you type the next correct character. After a brief discussion, we agreed to use PyGame. I have used it for a number of personal projects, and my two fellow team mates were interested in trying it out

We roughly divided the tasks between us, and my team mate set up a shared GitHub repo. I quickly found an image of a racing track as the background and a couple of cool looking racing cars. Starting from some simple sample PyGame code, I created the first version – showing the background image, and a car which moved a little on every tick of the game loop. In the meantime, my team mates showed the text and responded to the keyboard.

We brought this all together, did a bit more polishing, and finished just in time

Our game worked very well, and was exactly as I’d envisaged it. Our fellow Code-dojo-ers seemed to like it too

As it was for an informal coding exercise, not for public consumption or publication, and because of the time constraints, I decided to use copyrighted images. I have now replaced these with copyright-free images, from CraftPix and OpenGameArt

The final result is currently in a private repo. I have asked my team mate to make it public, and will update this post once this is done